Great to B Back

But do people know what they mean?
Seems they mean the law of karma.

Some guy made off with 50 billion and when he’s wearing numbered jammies and eating slop off a cafeteria tray, people grin and say,

Folks are pleased about that. Justice has been served.
Not only by the court of law, but the people’s court.
Karma.
The justice that comes up from behind (as its going around) and bites you on the ass.

Karma herds black sheep.
But also white fluffy ones.
When a penny-poor do-gooder finds a Pollock in the attic, that’s also the going around coming around.

In 1983 I moved East of Avenue B.
I paid $265 a month for a long lean railroad apartment.
When friends came to call, they called up to the third floor.
I’d lean out the window and throw down my key.
They’d let themselves in and huff up the three flights.
We’d share clove cigarettes and drink Cafe Bustelo.

The intercom arrived several years later.
It was installed in the kitchen, just over my bathtub.

I got what I paid for.
My crib was cold in the winter.
Hot in the summer.
Daylight safe.
Nighttime dubious.

This scenario, multiplied block by desperate block, galvanized the neighborhood’s artists towards a revolutionary pitch of plenty known as the Downtown Art Scene.
We call it the 80’s.

Our patron was urban blight. Commercial storefronts, long abandoned and boarded up, were available from bushwhacked landlords for a few hundred bucks a month.

We didn’t know the developers were nipping at our heels.

In 1994 I left Avenue B.
Headed West.
To Venice Beach.
I rented a studio steps from the beach for $500.
First month free.
Nice.
Except I had to drive a car.
And learn the language of the natives.

A lot has gone and come around since then.
I’m back in NYC via California, Hawaii, India.

I visit my old landlord.
He and his wife are pure gems.
Back then he worked a full time job in addition to maintaining the building and providing for his extended clan.

Today, he’s retired.
The building’s been modestly renovated and maintained rent stabilization.
So, rents are fair.
Many of my old neighbors stayed put.

We sit in his kitchen nook, drink instant coffee, eat pound cake.
You remember, he says,
We were together in the hard times.
Back then, my wife and I had to reach into our own pockets to put oil in the furnace.
Now, we’re laughing all the way to the bank.

(By this, I imagine he means the tiny kitchen nook, Nescafe, Pepperidge Farm Bank.)

I was offered 1 million for the building. But where’m I gonna go?
My whole family lives here.

I leave him my number, in case a place opens up.

Yesterday, I got the call.
An hour later I’m sitting in the nook, mug in hand.

It’s a back apartment.
Smaller than my old front one.
But the tub is in the bathroom.

There is nary closet nor cupboard.
But the walls are smooth as sheetrock.

The rent is nearly three times 1994s.
But well below market.

We celebrate with a nip of Irish Whiskey.
When a big apartment opens up,
he tells me,
you’re top of my list.

What goes around really does comes around. 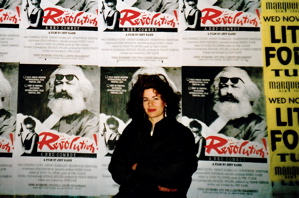