Back In The USSR

Head east on 10th street and stride towards 268.
Before you see the sign, you’ll feel the heat rising off the bathhouse like humidity off of black August tarmac.

Last week I climb the steps, lean against the counter and hand over my watch, earrings, and wallet to the open security box offered by reliably grumpy Russian proprietor Boris.

My Old Friend, how long you been coming here?

Boris, I been coming here since you and your business partner David were friends and stood behind that desk laughing and glad-handing customers.

Since Madame Agnes reigned downstairs where she laid me out on that marble butcher’s slab and rested my arm on her enormous bosom to massage my neck and shoulders.

Boris, I been coming here since the Turkish guy.

When he said it, it was a grunt.

Time was the  East Tenth Street Russian and Turkish Baths was a Turkish bath.
At least Turkish owned.

The fit young Turk was a chiropractor.
Or so he claimed.
A stealthy commando-styled chiropractor.
Upon entering the establishment, the unsuspecting patron could suddenly find her throat caught in his sure grip.
Without a whisper, he’d stepped from behind and then twisted and turned a neck so quickly you’d think he was a carnival geek cradling a chicken.

A series of snap crackle and pop would ricochet down my spine and deafen like skeet shooting through my cerebrum.

Stunned, I survived where the chicken wouldn’t.
My head still on.
Straighter, yes.
But a hell of a lot tenser.

Thanks to the Turk then for the baths down below.

Some people are schvitz people.
To schvitz is to be alive.

And schvitzless is a slow rigor mortis particularly when your nearby domicile is an authentic tenement.
Where wind whistles, “Brother Can You Spare a Dime” through the gaps in the window’s wooden frames.
Where the heat hisses, “Steam Heat” and slips out into the cold night headed towards an encore of “Take the A Train.”

The Tenth Street Baths, upstairs and down, are a convocation of geeks, freaks, outlaws, thugs, and mobsters.

Ayy, how ya doin? When d’you get out?
One ape-chested patron greets another,
as a third starts to bark,
Who let the dog out?

Mix in a handful of sour stoop-shouldered hipsters and a few radiant, tiny-pored, beautiful people.

It’s the non-Schvitzers who ask,
What do you DO there?

It’s like telling someone you’re into bare-fisted cage fighting.

What do I do there?

I sit in a room so hot, if my bare leg touches the wall, it’ll scald.
The heat assaults with a ferocity that causes my mind to blackout in a proto-Ayahuascan vision quest.
For respite I step into a pool so frigid my numbed feet barely climb back out.
Once a month I actually pay a bear of a Russian to pulverize me with frothing oak branches and manhandle me through a sequence of three-quarter and full nelsons in a climate that simulates the inner sanctum of a pizzeria’s brick oven.

When I leave, my arms are too weak to hook my bra.
My skin is blushing like a bride’s.
My waist is taut, my face aglow, each breath like a baby’s first.

Exeunt the Turk.
Enter two Russians: Boris and David.
They add barely a sun roof, flavored vodka, more massage rooms, expand the men’s changing room by squeezing down the women’s.
Once friends they are now mortal enemies and swap out ownership every other week.
It’s like divorce where the business is in a custody standoff.
Dad moves in one week and then packs up and leaves with out a trace.
Mom moves in the next.
And ditto.
For decades.

Mom and Dad each have their spies.
They’re called employees.
Do they double or triple cross?
Who knows?
At the Tenth Street Baths, you’re back in the USSR.

Buy a seven or ten-pack pass.
The economy’s in your favor and cash’ll get you a special price.
It did me.
But my pass is only good for Dad’s weeks.
I have to go next week and sort something out with Mom. 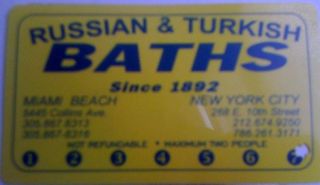 But for Schvitzers what’s unbearable, is not to schvitz.

But to collapse on a wooden bench in a small tile-walled room, where cast iron radiators stack floor to ceiling and output enough steam to propel a Mississippi River boat, blasting with a force and a din that convulses then slackens muscles immobilizing them like strychnine?

For a Schvitzer, that is to lay down with the Gods.