The experience of being touched has direct and crucial effects on the growth of the body as well as the mind.
Touch is a means of communication so critical that its absence retards growth in infants, according to researchers who are for the first time determining the neurochemical effects of skin-to-skin contact.
The new work focuses on the importance of touch itself, not merely as part of, say, a parent’s loving presence. The findings may help explain the long-noted syndrome in which infants deprived of direct human contact grow slowly and even die.
– New York Times 1988

World War 2 orphans who were cared for, but not held, died from lack of touch. More recently, researchers saw the effects of overcrowding and limited care in Romanian orphanages included attention deficit hyperactivity disorder, post-traumatic stress disorder, psychiatric illnesses and bipolar disorder. The absence of touch results in a failure to thrive.

I grew up in a family that was marked by a tightened morality of the 50s. Women were encouraged NOT to breastfeed and instead opt for the modern convenience of sing bottles of infant formula which is certainly less bonding. My grandparents were formal and distant. At grade school age I had two great grandmothers who were old and grey and tender and warm. I remember hugging them but I can’t recall many other hugs.

When I was 11 my family moved to London and I enrolled in a Catholic British school where I had many European classmates. I was intrigued and charmed to watch mothers and daughters, sisters and friends as they hugged and kissed hello and goodbye on the cheek, 2 or 3 times. My new friends, leaned to me, as did their mothers, and I stepped into a new cultural exchange of hugging and kissing.

My first day at University, at NYU’s Drama program, everyone I met hugged and kissed. Wow, I had found my people! I really had a feeling of coming home; home to a place of connection and community and trust and expression.

I lived on Hawaii for several years where hugging is part of nearly every greeting. It was the antitheses of LA where I had just lived for 13 years. What an array of hugs; there were hippie hugs but also the local island hugs, where I was pressed tight in a firm embrace and held in a secure and stable squeeze.

I love to hug. And easily hug old friends and new ones. I now have good precedents for hugging from around the world. 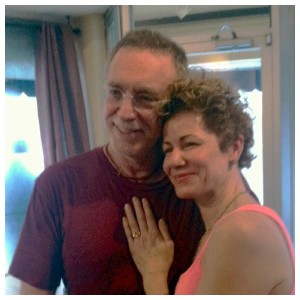 I recently went to Optimum Health Institute in San Diego for an incredible education in wheat grass, sprouting, live foods, probiotics and fasting as well as health and wellness classes. Right off we were taught, “research says we need to be hugged 5 times a day. So can we have some volunteer huggers?”  The volunteers wore a tag, and whenever anyone saw one, we could ask for and receive a hug.

I am still on program with daily wheatgrass, sprouting, probiotics, and 5 hugs.

Share five hugs a day, every day, and transform along with friends as you wrap up in each other’s arms, and press heart to heart.

Start hugging and listening to the Song of Love inside yourself. Click here to read all about your Heart Chakra.  Added bonus!  Click here and find out how to make your skin huggably soft.

Don’t have anyone to hug RIGHT NOW? Hug yourself and treat yourself to a nice oil massage while you’re at it.