In 1993 I was an indie film actress, downtown theater artist and a yoga teacher. I left New York for Hollywood where I worked as a commercial, film and television actress as well as a yoga teacher and eventually a yoga consultant in film and TV.

Ever camera ready, LA was bright and dry.  It robbed the curl from my hair and dew from my cheek.  New Yorkers walk and talk. We express ourselves through style, opinion, and wit. Angelenos drive cars. Slim women pad from vehicle to destination in flip-flops, yoga leggings and messy ponytails while guzzling liquid. Slim women favor big cars; black is slimming, behemoth SUVS more so. Women arrived for yoga class with only one key. Then tossed it in a corner. After all who needs a bag when you operate a vehicle the size of a SuperShuttle?

New York’s most popular teachers, if we really had such a thing, appeared to lack protein and a comb.  LA’s top teachers could strip to skivvies and pose for a Baywatch calendar. A beloved teacher had just moved East to coach a football team leaving a town of besotted beauties.  I met these sighing teary blondes on auditions and in yoga parking lots. I’d never fathomed a bandana’ed yoga teacher could inspire such universal suffering.

My first yoga job was subbing for a bronzed Adonis. He spoke his first instruction with a mouth full of frozen yoghurt. While he spooned, he stepped out of his jeans and masterfully toed and kicked his socks off,  all this without the use of his hands! That may not be yoga but its damn good coordination. Rather than a shirt, one student wore a crochet bikini that dangled tiny seashells. In New York we wore vintage Capezio and spoke of the sit-bones. This shirtless hunk told us to put our “asses in the air.”

One of my first private yoga clients was a celebrated rock and roll beauty, the languid, wry divorcee of an American superstar.

After several sessions she summoned me,

Do you know what I really want from yoga?

I felt nervous, was I qualified to impart what she sought?

I mean look at you, you have a great ass. Do you think you could give me an ass like that?

I tried my very best.

This month, I produced and instructed 10 videos for Livestrong.com. Livestrong gave me the titles and I fulfilled them alongside my adept team.

One video is called Yoga Exercises for the Hips and Butt. Of course yoga is not for hips or butts. Or lats. But Yoga Asanas, the traditional physical poses that we practice, are for the entire body.

My teacher Sri K. Pattabhi Jois taught Asana as overall firmness and steadiness. An Asana, he told us, was not just stretching or bending, but firm and stable. One Asana is not for the hamstring and another for the shoulder or Achilles. Asana is correct when our entire form fulfills the position and no area of the body strains. And when this is supported with steady Ujjayi breathing and a singular gaze, Pattabhi Jois said the pose is standard and no longer requires effort. But, he explained, attaining this quality required incredible effort over at least 1000 practices. And then he’d cleverly add, 1000 correct practices.

Very often newer yoga teachers complain to me about their students who only care about the body and not the spirit, and some who only come to class to lose weight.

It is a rare student that comes to yoga for freedom from suffering and demands samadhi now. And honestly I’m not sure many yoga rooms offer samadhi. Now.

20 years ago my teacher Sharon Gannon at Jivamukti Yoga wrote in my birthday card, May You Visit India and Meet Many Saints. I feel blessed that her wish has been fulfilled many times over.

Slowly, slowly, Pattabhi Jois told us, take practice every day and all is coming. 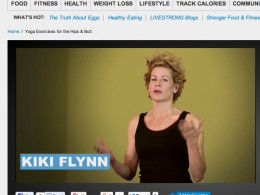 I’m Kiki Flynn here at Land Yoga and this is Yoga exercises for the hips and butt. When we practice Yoga for strength we develop incredible overall tone and then we’re beach body ready everyday of the year. We begin with chair pose. Turn and bend and arms go up, inhale, breath. We take Yoga for firmness, strength, and tone not for stretch so we’re narrowing squeezing the hips in, toning and squeezing the thighs, narrowing the waist. Lets slide the leg back to a warrior pose and here we are not in a stretch but a firm tight standing tone and with strong toned legs come up and pivot over the front leg and down we go and take your head back a little further. Squeeze the legs in, tone the waist, tone the abdomen and you really to feel that you’re overall tone action from head to toe and we’ll step forward for one more chair pose, head back, squeeze it down, narrow the waist, arms up, head back further, squeeze, squeeze, and we can release, great.